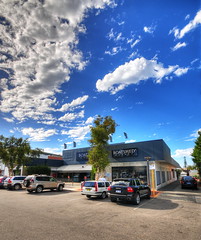 EARLY YEARS IN COTTESLOE
Prior to 1950, the original site was owned by Mrs Cole who leased it to various tenants including a wood yard, ice vendor and the village blacksmith, who was also the local Justice of the Peace.

A RICH HISTORY OF BOAT BUILDING
In 1950, Mr Steve Ward began leasing the premises for a sum of 5 shillings a week, and established a boat building facility. The first craft built here was a 13-metre vessel named SCULPIN, for Mr Bob Watson.

FRESH FOOD MARKET & WINE LOFT
The boatshed was later converted into a premium fresh food market, officially opened by the Mayor of Cottesloe in December 1988. In 2015, partners Michael Pember and Craig Skead made the decision to further add to the character of the building and celebrate the nautical history of Cottesloe’s boatshed. Launched in March 2017, the Wine Loft is constructed out of four retrofitted shipping containers and sits suspended from the original gantries.